My bike journey has developed through an incredibly journey over the last few years, starting in The Bahamas and now reaching hard enduro. Here’s the full story.

Don’t wait for life, ride to meet it!

I did not grow up with motorcycles, I wasn’t a small kid braaping around at an early age. I was into the world of four legged friends, obsessed with horses. This meant I was lucky enough to ride a family quad bike in my teens. But no motorbikes. However, the combination of this and my love for cars and adrenaline was enough to spark motorbike enthusiasm later in life.

As soon as I turned 17, I was off driving; passing my test just 16 days after my birthday and within the year I had my IAM Institute of Advanced Motorists qualification. In these early days, my world was all about cars. The Girl On A Bike was not even on the radar.

This all changed when I lived in the Bahamas in my early 20s for 1.5 years, here on a remote island transport was difficult. I couldn’t afford a car, so I bought a Chinese Lifan Enduro 250 motorbike and had it shipped in. There wasn’t a single other bike on the island and I’d never ridden a bike before, but that didn’t faze me. Others can ride bikes, how hard can it me?

I was however rather shocked when it arrived part assembled in a box! Yikes. Thankfully a trade for a bottle of rum saw a local bush mechanic put it together and I was on my way. I never remember ‘learning’ to ride. I just did it as it was the only way I could get around the island. I was very soon found exploring the remote island of Eleuthera, where I lived, with my spear and fins strapped to the side for spearfishing beach adventures.

So my first bike was quite an adventure, lots of sand and track riding. I then came back to England and realised that it was about time I actually got my full licence…I immediate passed my full access licence but years went by without having a bike. I guess early in my career and post-university I couldn’t see the financial commitment of a second vehicle as feasible when a car was vital.

I was living in the UK working 9 miles from home and so I commuted by bicycle. However, this all changed with my accident taking the my strong body away from me [read more here]. In the years post my accident I was unable to do my commute cycling and thus was driving in our 3.5 litre V6 Mercedes-Benz Viano….which drinks petrol back and forth to work. Once physically able I decided to get a bike, the Suzuki Bandit, to skip the traffic and save money…

I went for a little 600 Bandit as it was the ideal commuter. Light, reliable, low cost and pretty nice to look at.

As The Girl On A Bike I wouldn’t say I am a stereotypical biker chick, but I am definitely a biker chick

Then came the Harley-Davidson’s

The love for Harley-Davidson’s started on our honeymoon when we hired two bikes out in Texas and racked up 1,000 miles across 5 days exploring Mid-point café on Route 66, Cadillac Ranch, Amarillo, and the breathtaking scenery of the Palo Duro Canyon. It was an amazing adventure [read about it here]. Then on one of our wedding anniversaries, we hired two Harley-Davidson’s in England and that was it. Within a few weeks, we decided to buy two, and the Harley adventure began. :Looking back now it was one of the best decisions we made in my recovery. In the first three years, around my numerous surgeries, we managed 10,000 miles, countless weekend adventures, wild camped, explored 6 national parks in the UK, enjoyed sunrise rides over Tower Bridge in London and generally had a blast on two wheels.

The Harley facilitated a sense of freedom and adventure but required minimal physical capabilities for me. We could get out and have an ‘adventure’, yes nothing like our pre-accident adventures, but it was still an adventure. I remember the first weekend away. We rode about 6 miles to a campsite, we had a BBQ, bottle of bubbly and I was out of the house. It was so uplifting for my spirits among so much rehabilitation and pain.

Read more about my irreversible journey as The Girl On A Bike to becoming a Harley-Davidson rider here.

I was off work post my first hip surgery, I was bedridden, but I woke up one day and turned to my husband “Please can I have a dirt bike?” To this day I’m not sure what sparked it by let’s just say he was more than thrilled by the idea. As soon as I was mobile enough, we started the hunt and found a Yamaha WRF250 4-stroke. From what we had read it was a great beginner’s bike, friendly and reliable. That is was!

It was 5 months until I could sit on it but I had it. It was sat there as a goal. Something to strive towards, help motivate me on those days where the pain just made me want to quit. Once I was able, always following medical recommendations, I was buzzing around on her, named Whizz. It was just gentle green lanes near home.

However, I soon realised my hip was not okay and more surgery was required. We also realised she was just too heavy for me at 125kg. A bit of research and introducing Smokey, a KTM 200 2-stroke at only 95kg. I’ve fallen in love with the fiery power and such ease of maintenance of a 2-stroke. Fast forward three years and I’ve managed about 5 months riding with 3 hip surgeries in between. The EXC was swapped for a newer model with the ‘hip saver’ button AKA electric start.

I’m now riding a Husqvarna 2-stroke and loving it. The improvement on the 2020 models is incredible.

Having had my forth hip surgery, a full reconstruction, I was on a the mend and desperate to get back riding. I was yearning for enduro but I couldn’t take the risk with my hip so decided to work on the foundations – trials. Picking up a Beta Evo 125, an ideal first trials bike, it all started in the garage.

Long before I could even think about riding it I was working on my balance. Much of my physio was core strength and stability so track standing was ideal. I would spend lots of time in the garage just balancing. Working towards taking my hands off the bars and eventually worked up to being able to hold a track stand for 15 minutes. Once able I then got outside and started low risk figures of 8 and slow maneuvers, before eventually ramping things up with a trip to Andorra.

ADV started with a mega adventure with The Girl On A Bike going to Bolivia riding Triumph Tiger 800s with Novo Adventures. There theory here was big comfortable bikes, low risk for the hip given the sort of terrain we would hit. I quickly fell for ADV due to the incredible mileage you can cover, the capability of the bikes and the culture you can absorb. More on Bolivia here: Death Road, Salar de Uyuni and videos over on my YouTube.

The combination of all these bike types gives so much freedom. On the Harley-Davidson, you have the open road, the distance and the ability to strap a bag on the back and disappear for the weekend. The adv adds some mud and serious distance. It’s all about the freedom and the adventure. However, it’s rather sedating, and with my inner thirst for adrenaline, it doesn’t fully satisfy me. This is where the dirt bikes come in! On the KTM you can travel across epic terrain and explore the countryside in a totally new way. It’s fast, technically demanding and physically exhausting, whether it’s green laning or entering enduro races.

But, all of these types of riding have one great thing in common, and that is the ability to travel.  I’ve now ridden in Texas, UK, Wales, Scotland, Ukraine, Sardinia, Spain, Andorra, The Bahamas, Dominican Republic, Croatia, Italy, Germany, Switzerland…the list goes on. The scenery you can explore on two wheels is incredible. I’m looking forward to making many more adventures, most likely in countries I wouldn’t have landed in if it wasn’t for the bikes.

The adrenaline seeker was back

With my rehabilitation seeing my back to strength, still very much aware of my slightly reconstructed body, but able to push on, my inner thirst for adrenaline was screaming. I’ve always been use to putting myself outside my comfort zone with extreme sports such as snowboarding and kite surfing so now it was time to up my game. Introducing hard enduro. It started with small terrain, building the skills and now I’m riding the British Extreme Enduro Championship. I’m now riding a 2020 Husqvarna 250i and I’ve entered the RedBull Romaniacs in the IRideWess hard enduro series.

Check out how my first ever hard enduro event, Valley’s Xtreme, came about and how it went here.

Where the road ahead will take me is something I look forward to finding out!

Much love, Vanessa aka The Girl On A Bike

Wondering if 1000 Dunas is the rally for you?

Wondering if 1000 Dunas is the rally for you? ANOTHER FIRST FOR BRITISH FEMALE SPORTING ACHEIVEMENTS The first female to ...
Read More

#BecauseICan free school workshops and free school speaker with Vanessa Ruck aka The Girl On A Bike School children are ...
Read More
Close
Are you on socials? 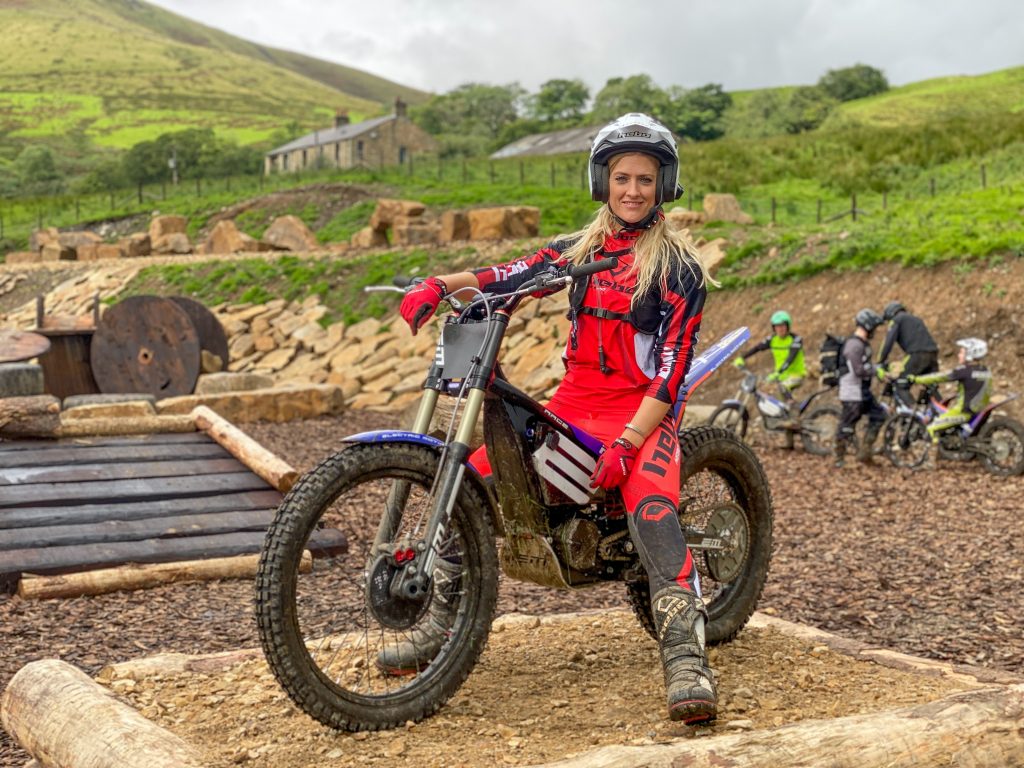